Home » Cases » A Diversity policy that pays off: the EY success story

A Diversity policy that pays off: the EY success story

EY Netherlands shows that you can achieve great success with a targeted diversity policy. In 2005, of the Big Four consultancy organizations, EY had by far the fewest women in senior management positions. The most important explanation from top management was that a career in their organization required total dedication to your work. And that attitude suited women much less, especially if they had children.

For years, Esther Mollema of Direction has been helping EY with shaping their diversity policy, leadership courses, mindbug workshops and coaching. How different the top now looks at EY in the Netherlands. The highest organ, SALT, has three women. EY now has the highest number of female partners in the Big Four. And EY is far from finished. Diversity Manager Monic Zents: “We look globally and we are still setting new goals. We score lower on the percentage of female partners than, for example, Turkey, where 35 percent of the partners are women. There is still a lot of work to be done, but we have also taken great steps. We now have many systems around diversity in place. We started with women in 2005 and we are now also using this successful approach for talent from ethnic minorities. Our next step is more inclusivity. ”

EY is one of the best examples in the Netherlands of an organization that guides its managers in eliminating mind bugs. 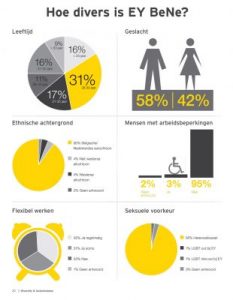 EY achieved successes with its diversity policy through concrete measures. Monic Zents: “In 2009 it was sometimes still noticed in the highest echelons that customers were not waiting for female partners. That is really very different now. With the mandatory seven-yearly change of accountants from listed companies, we really noticed that you can no longer arrive with a one-sided, homogeneous team. Our male and female customers really do not find that acceptable. Despite the long crisis, EY did good business and grew into the market leader in the Dutch market for business services. EY’s diversity policy is paying off. Monic Zents: “EY has tested 20,000 of its global audit files (clients whose accounts we audit). And there were remarkable results. Retention was better in diverse male / female teams; employees in various teams were more satisfied with their work and stayed longer. In addition, we saw that customers rated the quality of the work of various teams higher. That is very important in our industry today. We also saw that the profitability of the accounts of various teams was higher. Exactly the things we want in our organization. With this convincing result, we will only continue with even more vigor. ”

What has changed at EY?

Monic Zents talks about a number of measures that EY has implemented in recent years:

Is 30 percent of a group of managers female? Then at EY, from the promotions to the next step, for example to senior manager, 30 percent must also be women in a year. Previously, EY worked with comply or explain, but then the penny for women fell just a little too often in the wrong direction and women too often dropped out for promotion. Now it is mandatory. You have to have a very good story to get out of it now.

EY closely follows the numbers on the influx of new people. From the intake ( both of graduates as well as of mid career hires) up to and including manager level, 50 percent must be female, for senior managers this is 35 percent, and for partners 25 percent.

In the beginning, EY only set a percentage for graduate hires. Subsequently, it was discovered that almost never women was hired at a higher level. Now, EY has also quantified these hires and compares those rates with other countries as well, to show that certain trends that people here accept as normal do not apply at all in other countries. Monic Zents: “For example, we saw a difference between the Netherlands and Belgium regarding the outflow of the starting positions. In the Netherlands, a lot of women left, but in Belgium it was the men. In the Netherlands we had until then assumptions about why women left our organization. We thought that they did not see the challenges of the work in combination with, for example, their desired mother role. We now know that people from the minority group always leave the group more because they feel slightly less at ease. And so we made that 50/50 percent intake mandatory for a very good reason. Over time, the percentages of women in senior management and partner positions will also increase to prevent this same phenomenon. ”

In the committees that deal with appointments, EY stipulates that 30 percent of the committee members are women. That is enough to be able to enter into a different dialogue. Another condition is that the criteria used for selection are completely clear in advance.

EY looked at the assessment processes with external help from trainer and consultant Annemarie van Iren. There emerged patterns that deserved attention. Competent women were more often referred to as “that girl” in assessments by a group of managers. The word “boy” was never used with men. It was also noticeable that in a number of parts the quality of the professional technique of the women was not discussed – neither in a positive or negative sense – but in the men it was. Analysis showed that assessors do not consider technical expertise to be an issue in women, they assume it as good. So they didn’t say a word about that, but – not in a positive sense either. In men, professional technique was much more likely to lead to a positive or negative rating, which of course benefits men with a positive rating more than women. Women do not receive that explicit recognition, which is detrimental to their final assessment. Nowadays, most review committees that do the assessments per employee of a group also have a partner from another group present who pays special attention to possible mind bugs on diversity. This person is allowed to break into the topic if he or she suspects mind bugs. And that helps in the assessments for women and immigrant talent.

For years, EY has agreed that there should be no difference in the assessments between men and women. Yet in practice there used to be too great differences in some groups. When Monic Zents discussed this with a group, she challenged them with the question, “Maybe we don’t hire such good women?” Immediately the most masculine man in the group replied: “No, it certainly isn’t. The women complain less about it, and because they don’t complain about it, they don’t get it. “To resolve this phenomenon, EY has now built a mandatory tool, which is used to directly check the proportions in the ratings given. An HR employee can then provide immediate feedback during the conversation and ask for a review. For example, outcomes are immediately checked, discussed and corrected.

EY encourages training on mind bugs across all teams. In the groups where the differences are greatest, it is even mandatory. EY is now really intertwined with diversity, says Monic Zents: “My work as a diversity manager is changing. HR can take over more and more of the standard things, also because they are simply mandatory. There are people all over the organization, including many men, with a very good eye for diversity. A lot of people think along with me and give signals. ”

It starts with the leader

How does EY show guts in its diversity policy? The initiative for the change at EY came from former CEO Pieter Jongstra, says Monic Zents: “He showed vision and guts. He personally paved the way to the SALT for women, together with Michèle Hagens, the first female partner in the Assurance practice and now also in the SALT. She always sought a dialogue with him about the position of women at EY. Pieter Jongstra in turn sought the space in the current structure to have maximum influence. He just arranged it. He did not choose women who looked very much like men, nor did he choose the standard suit types. The leading ladies of EY are outspoken, quite flamboyant and certainly not standard types. And EY is now reaping the benefits of this. They make the difference in a difficult market. Marcel van Loo has taken over the baton and continues the diversity policy. One of the three female SALT members, Hanne Jesca Bax, will soon be leaving for the European Board because her work and approach have been noticed. Fortunately, we have at least five women who could go to the SALT in the future and everyone knows that. The group of ambitious women is growing fast, becoming more visible and really more assertive.

Monic Zents: “EMEIA (EY Europe, Middle-East, India and Africa) has now made many initiatives that were previously comply or explain mandatory. After only one year, the EMEIA board concluded that target figures alone did not have sufficient effect. And with EMEIA’s current leaders, you can rest assured that you just have to hit those targets. No escape. Now that it is mandatory, more and more partners are becoming more proactive. For partners, failure to meet a mandatory diversity target affects their assessment. EY is very clear and firm. For the Global NextGen program, an international program for employees who can become partners, we must register 25 percent of all selected candidates. And if we don’t make it, we can’t send men. ”

Would you like more information about our commitment at EY? Please contact Robert Smit, telephone 06 – 54.253.643 or make an appointment with Esther Mollema